In search of the all-over tan

In search of the all over tan 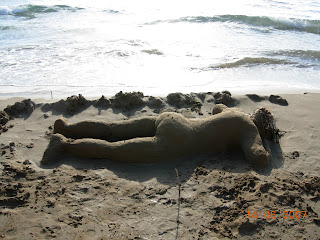 In a bid to get away from the noise & bustle of the brits on the beach, we often escape to more secluded beaches where people tend to leave ghetto-blasters lilo’s & clothes behind. & go Naked!! 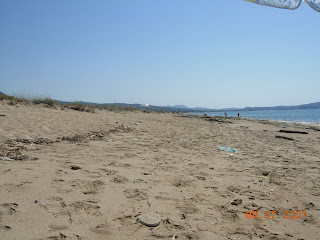 Almiros beach
Being hippies at heart this doesn’t tend to bother us too much, it’s not compulsory
& quite often it’s less offending on the eye than some of the locals & other Europeans (you know who you are) in their Speedo’s & thongs! However there does seem to be a certain culture that goes with this naturism.

The nearest “nudist” beach to us is Almiros, which is at the very end of the large bay that Roda & Acharavi are situated on. And whilst both resorts have sand or shingle with easy access to the water, Almiros is a deserted, rugged coastline, with sand dunes & on windy days almost impossible to get into the sea for the rocks on the waters edge.
This area seems to attract a gay fraternity, there does seems to be a lot more single men sunbathing (or with a friend) than on other beaches, we have noticed there are sometimes more cars on the beach than people, we think they may have chosen to sunbath in the sand dunes? But we haven’t been to look! 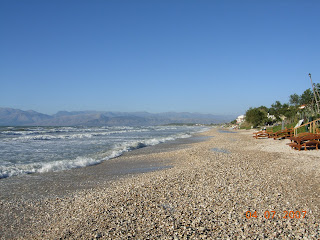 Shingle gets everywhere!
Anyway coming back to the culture thing on nudist beaches, there seems to be as much posing going on here as elsewhere, for example, you find the majority of males or females seem to have completely removed all trace of any body hair, nice!!
The Alpha males usually aged 40+ seem to spend hours, standing, hands on hips, surveying their territory, occasionally walking down to the waters edge, usually as someone else is walking up the beach towards them. On the more commercial beaches @ Arillas & San Stefanos, you get a more family approach to nudism, but they too behave in unusual ways!

The women folk seem to spend hours making something similar to crop circles on the beach, with stones that they trawl up & down the beach to find, along with copious amounts of drift wood that they attach objects to, making sculptures, hours are spent creating huge constructions & sand sculptures. 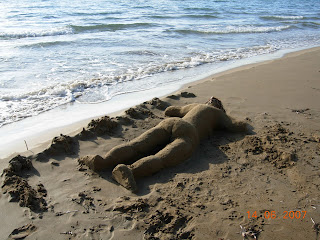 Its a sculpure Honest!!
But WHY WHY WHY do they do all this, bent double, legs straight like they are playing leap- frog? Anybody with clothes on would dig in the sand with knees bent!!
Also when these people go for a walk down the beach many of them will cover them-selves up by wearing a straw hat on their heads, Why? it must be to keep the harmful suns rays off their body or maybe as some sense of decorum.
Sometimes you see groups of people covering themselves & each other in grey mud, taking group photos then washing it all off again. 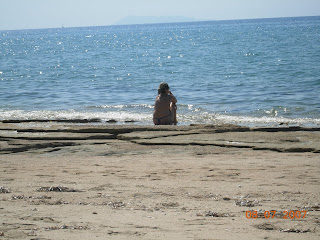 "I have to say I love you in a Thong"
In the search for the all over tan, it seems just as intense as by the pool bar, legs & arms are held in strange positions & angles for hours, as obviously crevices that never usually see the sun have to be tanned as well as the usual bits.
Anyway enough rambling from me as you can tell by the subject matter of his blog we’re not going to post many pictures on this one, so it’s back to the beach, must get Liz to epilate my bum cheeks tonight! 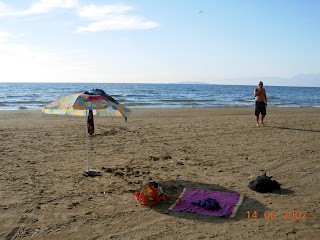 apparantly they're reducing the needle size on the syringes for next years flu!

Hi keith and Liz hope you are still enjoying yourselves out there. It looks fantastic.

Hey Keith thinking of coming to corfu for a holiday either back end of August or early sept seeing you are there thought i would ask where you would recommend not cheap at the moment though!!!!
Lisa

Thanks for the comments guys! yes I think we've seen some blister packs of the smaller "needle" German made I think, Lisa if you want a busy resort, look at sidari or quieter try San stefanos (west)

Hi guys, well holidays aint cheap coming out to Corfu on friday 31st Aug to Ipsos, not sure when you are back wondered if you had a gig on the friday or saturday before you leave? Lisa (Masta)